“It’s okay to blend,” Andy Smith, winemaker and partner of DuMOL Wines tells me. It is morning and we are walking through the rolling hills of Jentoft Vineyard, a site near Occidental DuMOL planted specifically for blending.

Smith has agreed to spend the day driving me through DuMOL vineyards. We’re discussing the region but also his evolution as a winemaker.

Jentoft is unique for DuMOL in that it is one of only a few sites they farm in the rolling hills off Occidental Road.

Beginning in the mid 1990s, DuMOL made a name for itself making Pinot Noir and Chardonnay of the Russian River Valley. More recently, the team has expanded further into sites hugged by the hills mere miles from the Ocean.

The addition of these cooler climate vineyards also reflects the winery’s shift towards a leaner style over the last decade.

But for Smith, the winery’s move into sites near Occidental is not just about climate.

“People talk about climate, but, for me, the soil makes the flavor. Soil is the building blocks of the flavor, and the climate is the vintage variation.” Together, Occidental vineyards have something unique to offer.

“To me the wine [in this area] always has a sense of air-oir, not just terroir, a conifer-spicy element.” Smith says. 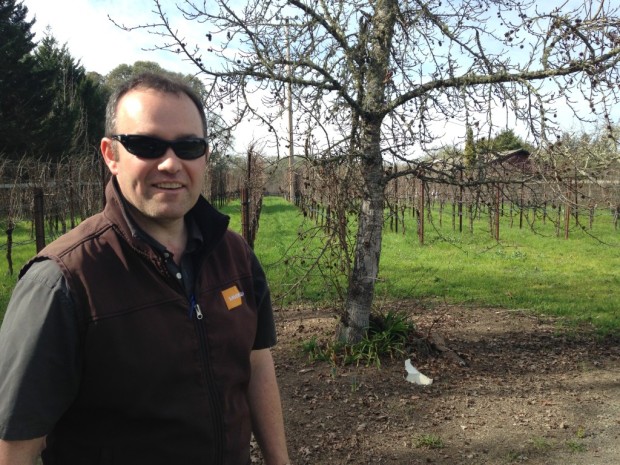 I ask Smith if he’d ever make a single vineyard bottling from Jentoft.

“I think the single vineyard thing,” he says, pausing briefly, in the midst of answering, no. “There has to be something distinctive, and agreeable, and verifiable, and repeatable. I am sure this site can make a distinctive wine that is a distinctive part of a distinctive blend.”

DuMOL bottles a number of single vineyard sites, but has developed and farms even more. The goal for DuMOL is to bottle excellent wines rooted first in their own farming. Some sites, in Smith’s view, offer that beautiful component within a multi-site blend, while other sites carry their own sense of completeness.

The point is that high quality vineyards sometimes best serve as components in a blend rather than on their own.

Developing a site’s character, be it is for blending, or single bottling, takes time. Jentoft, for example, was planted in 2007.

“This site is just starting to come into its own for us.” Smith explains. “The first year a vine gives fruit can be quite nicely structured and well balanced. Then, the next few years the vines are like unruly teenagers. Around eight years a vineyard starts to find its balance. Then around fourteen years there is another plateau, and vines become much more self regulating.”

What that means today has changed from viticultural views of even ten years ago.

“That is the fun part of the change in the last ten years,” Smith says. “From the idea that we need to tell the vine what to do. Today farming includes beautiful cover crops, insectiary rows, and then seeing the results. For me, that is the exciting part. You can taste the results as well. The wines taste better at lower alcohol.”

I ask Smith about his evolution as a winemaker. We are discussing Smith and his contemporaries from the early days of DuMOL.

“We were young guys in the late 1990s,” Smith says. “Starting out making rich wines. Now many of us are making lighter wines, with aromatic perfume. You know everything is different.”

But the change in style, Smith points out, occurred as part of a larger context, not driven by wine alone but the overall food culture.

“In the late 1990s, the scene was booming. Restaurants were booming. Chefs were going on with pork fat, and the wines reflected that.” Big flavor was not just a Parker fancy, but a cultural fascination.

“Some of my wines, I go back, and taste, and wonder, what was I thinking?” Smith laughs. “But, you know, it was the taste of the day. Now we have less new oak, and less toast. We have really moved to a more ethereal style with more perfumed aromatics. If you want more honey in your chardonnay, or more cassis and black fruit in your pinot noir, you pull leaves and expose clusters. Now we avoid sun exposure on the fruit.”

Smith’s reflection on sun exposure gets to the core of how DuMOL has shifted its style from bold flavor to graceful richness – DuMOL’s wines today a dance of movement and flavor.

“We’ve pulled back the wines as the farming has improved too.” Smith points out. “You can’t just go on and say, I am going to pick at 21 brix. You have to take a few years getting in tune with the farming, the soil health, and all that.” DuMOL’s focus on farming has helped the label grow at a judicious rate, focusing on quality as it allows for growth. It’s maintained such an approach by expanding its volume only as its farming allows. As a result, quality remains in the hands of the DuMOL team, relying on fruit they’ve cultivated to match the house style.

“That’s part of our philosophy.” Smith explains. “I don’t like any extremes – no extreme pruning, no extreme exposure to the grapes, not too much, if any irrigation. Vines are a crop we maximize, and you maximize that by making the vine work hard, not stressed but hard.” I ask Smith to say more about how he maintains that middle line in the vineyard, avoiding extremes.

“The soil health is, of course, really important.” He responds. “Water is available for the vine. The roots are really deep now but because they haven’t been force fed water, they don’t binge on it. Vines are self regulating. They take what they need, and don’t take too much. When you over irrigate, you force the vine to take what you give it, and it takes and takes and takes, then collapses and ripens through dehydration.”

Then there is the architecture of the vine.

“The way we farm with tight spacing, we are looking for grapes that are bright and fresh, with thick skins though we are achieving that without exposing the clusters to sun. It gives more herbal complexity, dense deep tones, and bright fruit.”

The result shows through beautiful integrity from bottling to bottling.

DuMOL wines offer concentrated flavor and structural density with bright fruit, and delicious acidity across varieties thanks to the farming, while cellar choices preserve the wines’ pleasing texture and freshness. The combination Smith describes as his winemaking goal.

“I like texture, but I also like freshness. Any texture or density,” Smith clarifies, “should come from the vines.”