Talking with Nicolas and Elena Catena

Our last day in Argentina we were able to spend the afternoon lunching with Nicolas and Elena Catena, of Bodega Catena Zapata. The couple helped bring Argentine wine into the International market over the last several decades, opening the door for other producers of wines from Argentina to enter the United States as well.

Catena Zapata began originally with Nicolas’s grandfather Nicola who moved to Argentina from Italy in the late 1800s. The opportunity for shifting varietal and quality focus in Argentina has greatly increased these three generations since the project began.

In taking over the company, Nicolas has been dedicated, along with his daughter Laura, to raising the focus on quality and understanding terroir. The level of influence that Nicolas Catena has carried in Argentine wine can readily be compared to that of Robert Mondavi in California. Catena in fact names Mondavi as one of his inspirations. Meeting Nicolas and Elena Catena to share in food and conversation was a genuine honor.

When talking with some people the level of experience they carry shows finely distilled through the insights they share in conversation. In such instances, I prefer to present a transcript of the conversation, rather than an article on their work–especially in a case like the Catenas, where much has been written on them already. With that in mind, following are some of the stories and insights Nicolas and Elena shared with us. Over lunch we enjoy several wines that the group had named as favorites earlier in the trip–a 2004 Nicolas Catena Zapata Malbec, a 2001 Nicolas Catena Zapata (Bordeaux blend), and a 2009 White Bones (high elevation) Chardonnay. Sitting beside Nicolas during lunch, I turn to thank him for sharing these wines. Our conversation begins.

“We have been thinking, the wine has been so well received in the American market that we say thank you.” The conversation opens up to the rest of the table.

“With my father, there was this idea. It has been like there were two different wines [in the world], the French, and everything else. You remember the famous tasting in France when the American challenged the French. For my father, American wine winning was a shock, and also for me because my wine education came from my father. We had an inferiority complex until that moment.

So, for me, my inspiration was not Europe, but California. California in the 1970s and early 1980s, when they were trying to do wine like the French. I remember when I met Robert Mondavi he told me he was trying to do what the French do.

“I used to visit California in the 1970s. In 1980, I was a visiting professor at UC Berkeley in Economics. So, our first weekend was visiting Napa. The first winery we visited in Napa with Elena was Robert Mondavi. We went just as tourists. I was really surprised by the flavor. That started to change my perception. I was accustomed to French and Italian wines. I had never had a California wine of high quality before.

“After that I met Robert Mondavi. He was such a nice person he would answer every question. It was different than visiting France. He would tell us exactly what he did to make the wine.

“Elena and I decided to do something different in Argentina after those three years in California. Our youngest daughter, Adrianna, was born there. So, when we started this new project for Argentina for our own winery, our inspiration was California. The meaning of that was we started planting Chardonnay and Cabernet Sauvignon in Mendoza. Until that moment these varieties were only a little bit in Mendoza. The most important variety in my family [before that] was Malbec for red and Riesling for white.

The Catena’s were the first to plant at over 5000 ft elevation in the far Western portions of Mendoza at the foot of the Andes. Today the zone is recognized as producing some of the highest quality fruit for the country, and many other producers have followed suit, planting on the same plateau but East of the Catena’s vineyards.

“Everyone told me I was crazy, that the grapes would not ripen, that there would be frost. And it paid off because today we think that the best expression comes from this altitude. When we went up there and began planting, we were simply looking for lower temperatures but finally we discovered there was a factor there we had not considered–sunlight intensity.

“Such intensity [due to the change in atmosphere and decrease in UV protection at higher elevations] seems to be relevant for flavor expression of anything you plant at high elevations. At that altitude, the radiation, the UV-B, seems to be really high and deepening flavor expression. We are in the process of discovering how this works. What I can say is that wines coming from this place are really different in this micro-climate from temperature, radiation, and elevation, and they should be different.”

Nicolas and Elena’s daughter, Laura Catena, helped instigate an elevation and UV-index study looking at the impact of UV intensity differences on grape development, and variety. The winery now supports a research institute also in partnership with UC Davis looking specifically at Malbec. I will write more about Laura’s work, and the research institute in a future post. Each of us in the group are asked to speak to our last day in Argentina, what we have learned and what we have seen. Mary Gorman-McAdams MW speaks of the light, and landscape of Mendoza, Argentina. “The light reflecting in the Andes, in the snow, that purity, that freshness, now I know that is what I am tasting in the glass. The altitude is such an important part of the terroir here.” She explains. “It plays such a role in the longevity, the complexity of the wines.”

Nicolas smiles and responds. “Thank you for your comments. Yes.” Some of the other comments have considered success and work ethic. Nicolas speaks again. “For me, the most important factor influencing success is luck. Niccolo Machiavelli said, success can be explained half by luck, half by virtue. Virtue for Machiavelli means the capacity to do a lot very efficiently. Joe Gallo responded, ‘I disagree with Machiavelli–luck is 80%.’ At this moment, I think maybe, I agree with Joe Gallo. Luck is a very important factor. Today, right now, I have decided. I agree with him.”

Mary responds, “I would think a person would have to position themselves to take advantage of their luck.”

Nicolas pauses for a moment, then responds. “I received really the education, the culture of an Italian family. I started working at the winery, and I had to work from the age of seven. I took care of the chickens, and a rabbit at first.”

From across the way Elena hears this and nods. “Yes, he grew his own.”

Nicolas continues, “It was an obligation. I had to do it. After going to school in the afternoon I had particular tasks I had to do. By eleven years old I did everything at the winery. That was the Italian education, the culture it brought to Argentina. The working culture.

Elena responds. “Recently we went to Piemonte, staying in an agriturismo [housing at a winery]. We were impressed by the working culture. They told us that due to the economic crisis there they have gone back to the old ways. They have many generations living together. They made us dinner one night. You walk into that humble house and you have a professional kitchen, making pasta by hand for the whole house. There was grandfather with the baby, and a whole lot of generations, and each one doing an aspect of the over all job.” 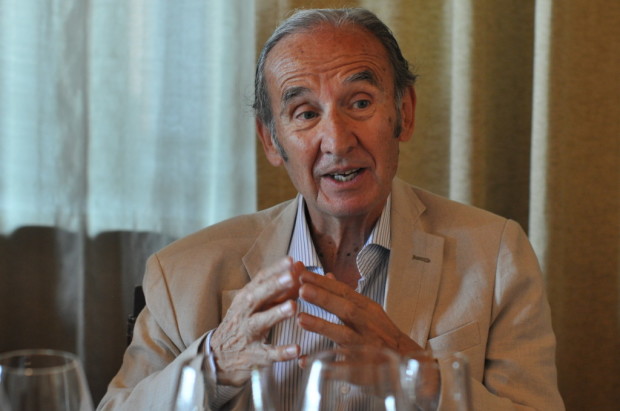 The speeches continue. Some are emotional. I speak of my family in Alaska, and the intensive work ethic they have. I explain that whatever I do I give thanks to my family, and that I see the Catena’s incredible work ethic, and how they honor their previous generations too.

After the speeches, Elena responds briefly to say thank you for what we shared. “If a person does not drink wine, you cannot trust them because if you drink wine, you may show your heart.” She tells us smiling.

People begin talking in smaller groups. Nicolas and I speak together first about my childhood commercial fishing in Alaska. Remarkably, they have a friend from Alaska living in Buenos Aires. He thanks me for telling him about my family. I ask him about his.

“I received an education very much like you describe.” Nicolas is referring to my growing up commercial fishing from the age of nine. As he continues, he reflects on his own childhood work, commenting on the challenge of it frankly, but not begrudgingly. “Still to this day I cannot answer why I had to work so hard. My family had money but I had to learn the work of 80 people. I learned the work of everything in the vineyard and the winery.”

He then responds to my comment about thanks and family relationships by reflecting on his own. “Originally, I was very young, my vocation was to study theoretical physics. I would have left the country to go further in physics. It is very close to philosophy, dealing with ideas. Then my mother died in a car accident and for my father it was very hard. I decided to stay with him. So, my vocation became economics, but mathematical economics, which is very abstract. I have no regrets because that is life.

“I meant what I said about luck and Niccolo Machiavelli, not just as an idea, as a practical reality too. That’s life. Growing up I had to study the intellectual in the morning at school, and the practical in the afternoon at the winery and vineyard. Also, I think, we do things for the love of our parents. It is like this. We do something important also to make our father happy.”

Thank you to Nicolas and Elena Catena.

Thank you to Marilyn Krieger and David Greenberg.