For our holiday gift this year, Jr and I decided that instead of buying each other stuff we’d do something really cool together. So, I called up Captain Bob at Coastal Air Tours and arranged for us to take a flight around the San Francisco Bay and over Sonoma in a 1926-biplane. Old Blue even still has its original motor and original 104″ prop – the same type of motor and plane used by Lindbergh to cross the Atlantic. 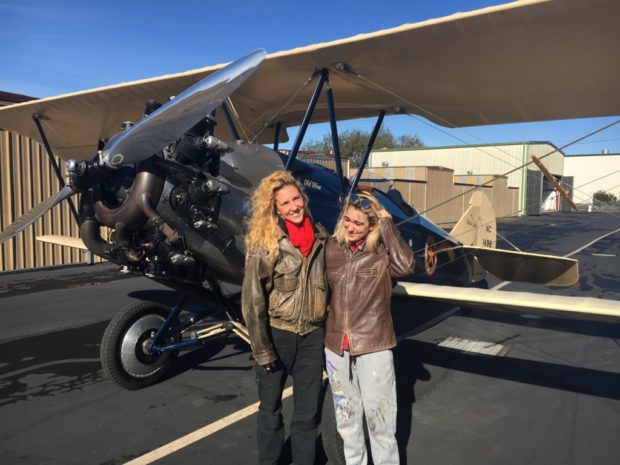 We flew in Old Blue but Captain Bob has another biplane from 1929 as well. He works on both himself and said that with planes of that era the maintenance is primarily focused on keeping things in good condition and well oiled rather than on replacing parts because most are so sturdy. He even loaned us flight jackets to stay warm. Biplanes are piloted from the backseat. The front, where we sat, was just wide enough for both of us side-by-side. Sunglasses are a must-wear since your eyes need the air shields and it’s so bright out. We flew Sunday of this past weekend. It had rained hard on Saturday so our trip was unbelievably clear and everything down below was a brilliant green. As much as I knew what we were getting ourselves into when I made our plans for the biplane ride it is still completely overwhelming to look down after takeoff and realize you are looking *over the side of the plane straight to the ground below unobstructed* because when flying in a biplane you are of course also sitting outside. My mind is still sort of blown over that fact – we flew around the Bay Area while sitting outside. While Captain Bob will do flights all over wine country or up the Pacific coastline, we asked if we could fly around San Francisco and over the Golden Gate Bridge. Remarkable to have them both come into view. Getting ready to circle San Francisco. We flew over the Bay Bridge then did a circle and came back along the Bay side of the city. Here, looking back as we flew on towards the Golden Gate Bridge. The Bay Bridge in the background. Heading towards the Golden Gate Bridge. San Francisco and Captain Bob behind us. The Golden Gate Bridge behind us. 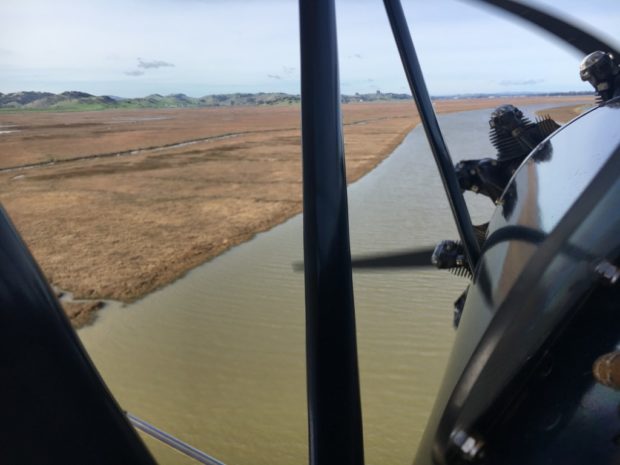 After flying over the Golden Gate Bridge we circled around Marin and then came back over San Pablo Bay and flew towards Sonoma hugged close to the ground over the slough. It’s a trip to see what you can learn about a region from touring it by air. For example, did you know San Quentin Prison has tennis courts? Or that there is a rather deep quarry in Marin right on the edge of the Bay – I kept thinking it was close enough to the water that it wouldn’t take much for it to fill with water. Or, in Sonoma there is so much low-lying ground full of clay from San Pablo Bay and its flood zones. Most of all though it was all just stunning. Once we reached Sonoma country again, Captain Bob flew us over the southern parts of Sonoma wine country before we headed back to land in town of Sonoma. Coming in for a landing.

If you’re interested in taking your own biplane ride, Captain Bob was fantastic. He does flights around the Bay Area, up the Pacific Coast, or over Napa and Sonoma wine countries. It’s pretty crazy sitting outside flying around in a biplane but it’s also fantastic and an utterly unique, special experience. It’s worth checking out.

You can also call or email him for more information or to make a reservation. His info is on the website.